I was looking for something else when I inadvertently came across a blog from Clear Risk about challenges in data analytics: 12 Challenges of Data Analytics and How to Fix Them. The author’s top 12 challenges that impede collection and use of analytics are:

While the blog is directed at risk managers, it got me thinking about the 12 challenges listed and what my top three for institutional research (IR) professionals might be. So here goes, in no particular order:

Anyone who knows me knows that I think this is one of the most important challenges we will be facing over the next couple of years. Dashboarding, charts, graphs and tables all have their important places, and we need to be able to present information effectively at all times. We all know of decision makers in our organisations who can’t understand data if it isn’t visually presented, and conversely, those people who cannot understand or use data that is visually presented. We also know of examples of bad data visualisations – one of my favourites is called WTF Visualizations. Another site I like is from Perceptual Edge, where visualisations are shown and alternatives given for presenting the information. I think this site clearly shows how important it is to present data appropriately and simply to allow understanding.

Although the same in some ways, support and budget can be very different (I am cheating a bit here by combining two into one, but it was hard for me to separate the two out). I have often been frustrated with the lack of support or understanding about the kind of effort that is necessary to undertake good analysis, and the danger of continuing to rely on the best you can do rather than to strive for best practice. I get no satisfaction from producing a report or presenting information on the basis of what I have, rather than taking the time and having the resources to do the best job possible. I am equally frustrated by those who take the information and ignore all the ‘health warnings’ that have been put on it, and use it for a purpose or to draw a conclusion that is false at worst or stretching the imagination at best.

Another two-for-one, but I think they are also related. Metadata in my mind is another way of saying that you have a common understanding of what is represented. Without good metadata, it is not clear what is being collected or how it can be used. It should be easy to do, particularly with terms that are generally understood, but I will give a simple example of something that has frustrated me for many years: pass rates for courses/papers/units. In various incarnations, I have seen people compare pass rates between different faculties, schools or departments to claim that they have the better pass rate, but when you look into it, in any or all of the pass rates presented there are differences in the data that mean that the information is not at all comparable. For example, one rate will take into account those students who withdrew from the course at any point along the way before the course is finished as failures, others will include only withdrawals after a formal withdrawal period has finished and include them as failures, and others still will say that withdrawals don’t count at all.

So, what do you see as challenges? Have I got the top three right, or should we have a top five (particularly as I had two-for-ones above)?

As a reminder to all, the 2019 AAIR Forum in Hobart is coming up from 11–13 November. This might be your chance to discuss or address challenges that you are facing as an IR professional and possibly even find some solutions! If you haven’t already registered, please visit https://aairforum.com.au/registration/ to register. 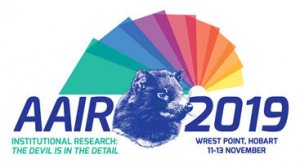 I hope to see you in Hobart in:

Data has a better idea photo by Franki Chamaki on Unsplash 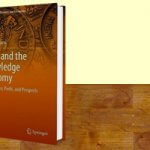 India and the Knowledge Economy: Performance, Perils, and Prospects