Collaborating in the Capital

Issues and Strategies for Cooperation in Higher Education Research

‘Collaborating in the Capital’. That was the theme of this year’s annual conference of the Canadian Institutional Research and Planning Association (CIRPA), a sister institution of AAIR. Never having been to North America before I asked some Canadian friends what Ottawa was like.

And guess what? They were right.

But Ottawa is also like Canberra in that it houses the federal parliament, a national war memorial (though nowhere near as big as ours!) and several excellent museums and galleries. It was also the location for the 19th Annual CIRPA conference, which saw 176 institutional research professionals from across Canada and the United States gather together to discuss issues and strategies relevant to their roles in higher education.

My CIRPA experience began on Saturday with participation in a day long workshop on the “Foundations of Planning within the Context of Higher Education” run by the Society for College and University Planning (SCUP). A range of institutions were represented, from Harvard right through to community colleges, so it was surprising to note some familiar phrases, often to be found reverberating down Australian corridors, being bandied around in a room half a planet away from our sunburnt shores: Benchmarking, Stakeholder Buy-In, Best Practice, Consultation and An Integrated Approach to name a few.

The conference proper began with a keynote speech on Sunday afternoon with papers continuing through until Tuesday evening. The format resembled a typical AAIR conference, as did much of the material covered. The main differences were in terminology (“provost” and “president” for “pro vice chancellor” and “vice chancellor”, for example) and types of institutions present. My impression of the North American system is that it doesn’t distinguish between the higher education and VET sectors, so representation ranged from the University of British Columbia on the one hand through to places like Dawson College on the other, which offers a mix of pre-university and technical training. This sometimes gave an interesting flavour to the papers on offer. I attended one session entitled “Challenges with Measuring Retention at a ‘New’ University” thinking I might gain a few insights to take with me back to Australia. It turned out that the challenges being referred to were those involved in persuading staff that measuring retention was a good idea in the first place, something we don’t generally have to worry about. It turned out that the institution in question had until recently been a community college, with a mission aimed squarely at transitioning students into university rather than holding onto them through to graduation. In this context retention had not been considered an important measure of institutional success, resulting in considerable faculty kick-back.

I presented a paper on Monday afternoon that focused on the impact and implications of the Bradley Review on Higher Education in Australia. There was much more interest in the Australian sector than I had anticipated, and the session was well attended and received. In fact, the first keynote speaker, Mr Paul Davidson, President of the Association of Universities and Colleges of Canada (AUCC), had spent some time talking about Australian successes in the international arena and how Canada could learn a great deal from our models and practices. This was in spite of relatively widespread awareness of the current challenges Australia is facing in this area.

The Canadian people were extremely friendly, and those I met both through CIRPA and in various museums and cafes around town went out of their way to make me feel included and welcome. I would recommend any other AAIRies who are thinking about international destinations to take CIRPA into consideration.

Just remember to pack a jumper.

Photo by Social Estate on Unsplash 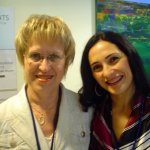